Yesterday I read this lovely post over on Fiona’s blog, and that was the reasoning behind my lunch choice today. For a few weeks I’ve been eyeing this little French cafe here in Nürnberg…. every time I walked by, people were sitting outside, sipping espresso and eating ice cream and cake. I had  no idea what else was on offer, but when I met my friend for lunch this afternoon, I suggested we give it a shot. Lucky for me, she was not averse to French food, and in fact had never tried anything besides a French chocolate cake once, and figured that was a good experience, so what the heck.

So off we went to Cafe d’Azur, which can be found on the main street up to the Nürnberg Castle, Burgstraße. The few tables outside were occupied, despite the gray, drizzly and cooooool weather, so we headed inside instead. Upstairs to one side is a small cafe bar, and on the other side you can find some very good-looking ice cream which is also available to go. Downstairs is the main room of the restaurant, where they also have all manner of French products available for sale. There was some ‘unique’ jewelry, wine (of course), mustards, jams, table linens, and other kitchen/decorative items for the home. It was really a very nice ambiance, I thought. Very warm and cozy, which was great given the abysmal weather we’ve got going here.

Apologies that I didn’t take pictures of the lunch itself, but it looked too good and I was eager to dig in. My friend got a ‘mixed plate,’ which had some hams, cheeses, olives, veggies in oil, and came with a side of bread. She seemed very pleased with her choice, and said it was quite different from the German equivalents. I went for a Galette, which was oh so delicious. It was filled with a buffalo mozzarella, cherry tomatoes, basil, and a bit of tomato sauce. I eat mozzarella pretty regularly, but I forgot just how much of a difference there is with the buffalo mozzarella. It was fantastic. It also came with a nice side salad, including dressing, and other vegetables besides the standard two leaves of lettuce, two tomatoes, and two cucumber slices. So that was a nice change of pace.

On the menu, they offered a variety of sweet crepes, so we weren’t sure if they had any cakes for dessert. But we asked the waitress, and sure enough, they did. Sadly there were out of my first choice, which was a currant/apple cake, so I went for the chocolate instead…. 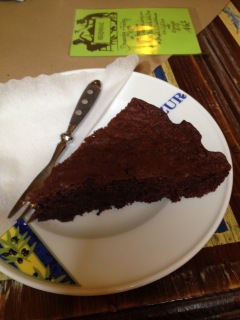 Now, I would not categorize this as a cake so much as a brownie. But, as any good American knows, one does not pass up a brownie when you can get your hands on one outside the U.S. And it was delish.

The clientele was made of mostly older, well-dressed ladies sipping on coffees and teas. I enjoyed their lively greetings of each other, and their spirited chatter about sitting in their favorite chairs. Tres amusante. I had a quick look at the wine they had on offer, but didn’t see prices, so I’ll have to head back and check that out. But overall, I thought the prices for lunch were quite reasonable. I had the Galette (with side salad), a slice of cake, a bottle of Orangina (loooove it), and an iced tea for 16€, including tip. That’s not too bad as far as I’m concerned.

So if you’re in Nürnberg and want to take a little side trip to the south of France, head over to….

Side note: After lunch we had to go to a kitchen supply store to pick up a birthday present, and I totally found the glasses I want for my future house. So if I should ever get married, feel free to send me these…. 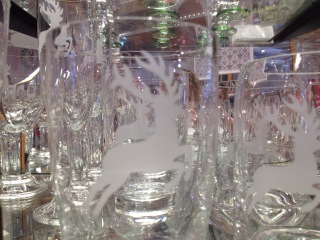 Damn right those have deer on them. Regular glasses, beer glasses, wine glasses, champagne flutes… I want the whole be-deered set. I ♥ deer.