A few weeks ago, the lovely Cynthia over at adventurings did a great post about places that she’d like to visit in the Czech Republic if (in this whole weird world we now live in), the borders remained closed but domestic travel was possible. I thought this was a great idea, and it certainly encouraged me to think a bit more about the places we might want to go if we can travel. Sure it might not be as far as before, but what was still possible? 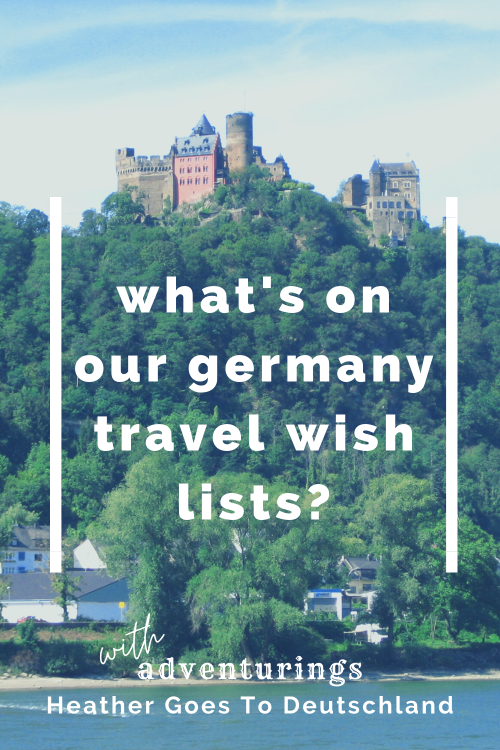 The two of us decided to make this post a link up, so I picked a few places, she picked a few places, and we thought it’d be fun to choose which of the other person’s was our top choice. As a side challenge for myself, I decided to avoid the Alps. There are still places there that I haven’t been, for sure, but at some point I should probably branch out, right?

Having said that… my picks are after the jump! Click on…

Hamburg has to top my list as 1) I’m pretty sure it’s the opposite of the Alps, and 2) I have yet to hear anything bad about it. I’m intensely curious about what a German city with a Scandinavian vibe could be, and the maritime history, proximity to water, and the ready availability of fish stuffed into bread (for BV), definitely don’t hurt. I’ve also heard many a tale of the musical scene (Hamilton auf Deutsch, what?) or the Miniatur Wunderland, but I think I’d prefer to wander along the waterways, look up at all those brick facades, and then have to chase down BV every time he gets a whiff of grilled fish. 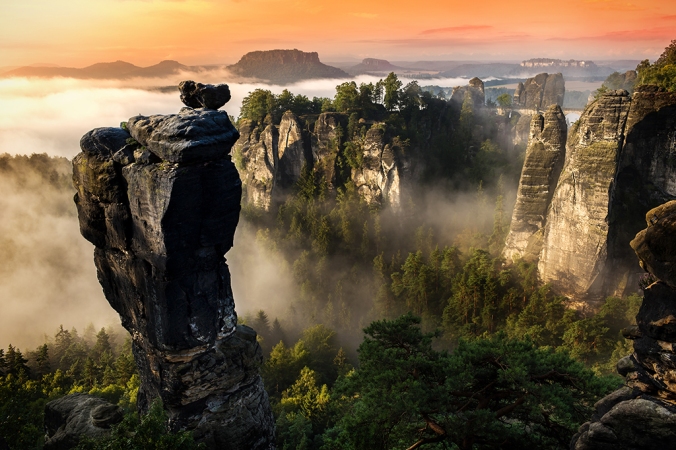 Aka, the Saxon Switzerland. We’ve spent a weekend in Chemnitz, and a day in Dresden, but more time in the wild, rolling hills of Saxony sounds like a great idea. While it lacks the high peaks, the incredible rock formations can be seen all over ze Instagram travel feeds. I still remember the first time I took the train between Prague and Berlin, and the way that the train rolled through the hills along the Elba, rock formations popping in and out of the greenery… I could kick myself for still not having explored that area more.

Ummm… rumor has it that Germany has beaches? And having seen those Strandkorb all over gardens and in the garden furniture section of the OBI for the last nine years, I think it’s time I saw them in their natural habitat? Personally, I’m a big baby when it comes to cold water so I’m a liiiiitle nervous about the possible temperatures at the North Sea, but look at that beach! I’ll probably live, even if I can just lie out and read a book or ten on the sand. 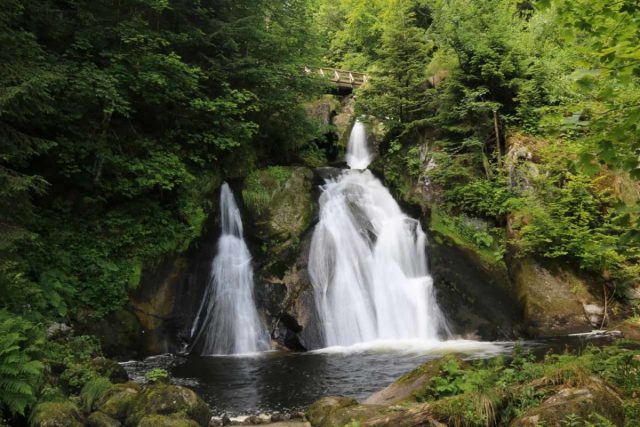 The very first trip that BV and I ever took together was to Freiburg and the Black Forest. It was a quick weekend getaway, and though we’ve driven through, and stopped in Freiburg since then, I feel like it’s only a drop in the bucket. I’m especially interested to see the place that is billed as having “Germany’s highest waterfall.” It seems that it isn’t really, but it’s relatively easy to access, so that helps? Either way, it looks lovely, and I do think that I really need to revisit the Black Forest as the first time we were there, we went to the highest mountain and got to see this…

Ah yes, the good old days when I hiked in beat up sneakers and jeans. It did clear up a tad, as the day went on. But I need to see more! Preferably, of the falling water variety. 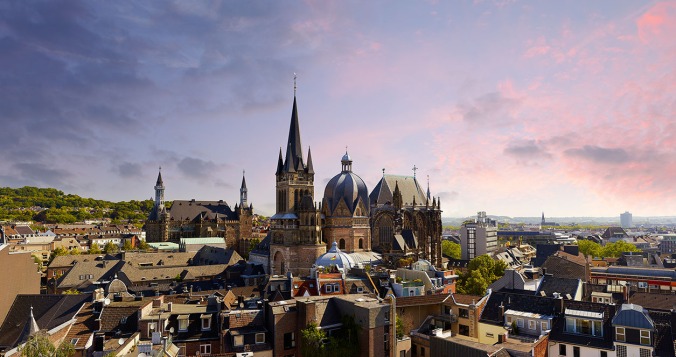 Sitting right near the border with the Netherlands and Belgium, Aachen is rumored to be another city with a great mix of culture and history. Though Charlemagne is long gone, his influence remains. I’d love to have a poke around the cathedral and its treasury, or spend a day walking the Route Charlemagne. And if you’re not in Germany, you can do it virtually!

If you missed the link up at the top, Cynthia’s posts can be found right here, and as for me, I’m adding the Spreewald to my list. Berlin is always worth a visit, but I’d love to see where the Berliner’s go to escape the city life. We might even get crazy and rent a kayak. Who knows?

Second choice goes to the Baltic coast, as the unexpected beachfront continues. Being able to smell the sea air on Rügen, as opposed to just seeing postcards of it or hearing about it, would be a welcome change of  pace. 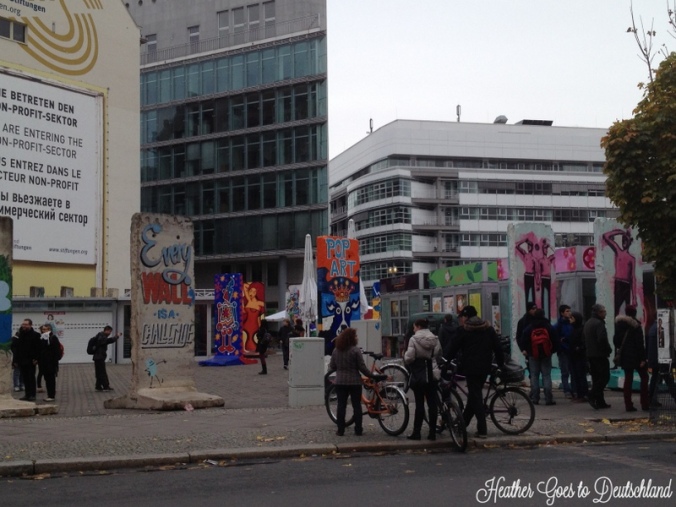 On another very gray November day, we spent our time wandering all over Berlin. BV hadn’t been to the city since he was a kid, and my old Prague roomie made an excellent tour guide. I don’t think living in the capital is for me, but it’s good to know that with the new(ish) high-speed ICE connection, it’s a fast option for a weekend away.

Rows of bikes parked alongside every available street corner is a common sight in spring. The orange juice container, not so much, but perhaps someone ran out of mimosa supplies after their ride?

Coincidentally, this was the day that I accidentally learned that the iPhone could do panoramas. This came in extremely handy in the Pergamon Museum, which is full of very large, very impressive things to take panorama pictures of. I highly recommend a visit, with or without a camera (phone).

My first trip to Berlin was so hectic, so stressful, and so overwhelming, I don’t think there was any way I could have possibly imagined moving to Germany on a permanent basis. But eight years in Europe later, and just shy of six in Germany (more on that later), here we are. 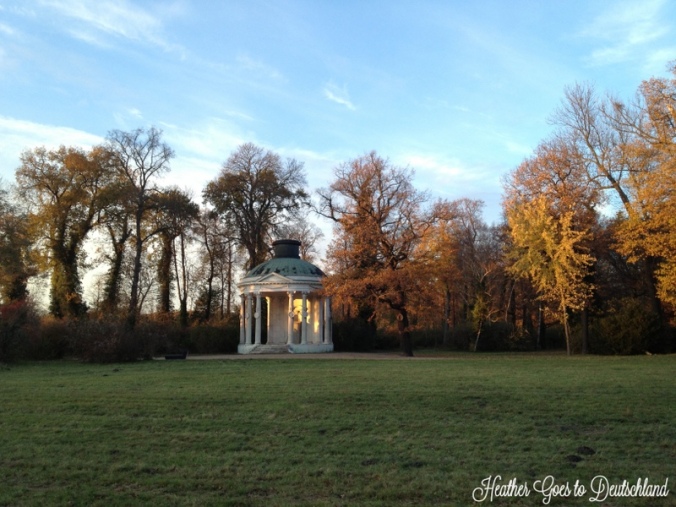 I just looked at the weather forecast for the next week, and it looks like rain nearly every day. *Sigh*

That makes me extremely happy to be able to go back through pictures like this one, which was taken on a gorgeously fading fall afternoon, as BV and I wandered the sprawling grounds of the Sanssouci palace, not far from Berlin. Whatever you may think about royalty (past or present), those people knew how to do a garden. Like many other palaces, Sanssouci was mostly for pleasure, which means endless pathways, fountains galore, oddly ornate little outbuildings, and tree-lined allées. And swans. Don’t forget the swans.

If you are in Berlin, I cannot recommend the Pergamon Museum enough.  However, it’s best to try planning a visit for 2019 at the earliest because if you go before then, you won’t be able to see/climb/experience the fantastic altar pictured above. Due to renovations, major parts of the museum are being redone in pieces over the next many, many, many years (or so it seems). But luckily for me, back when I got there in 2012 we could still see nearly all of the highlights. If you have any interest whatsoever in art or history, it is an absolute must-see in Berlin. Extraordinary.