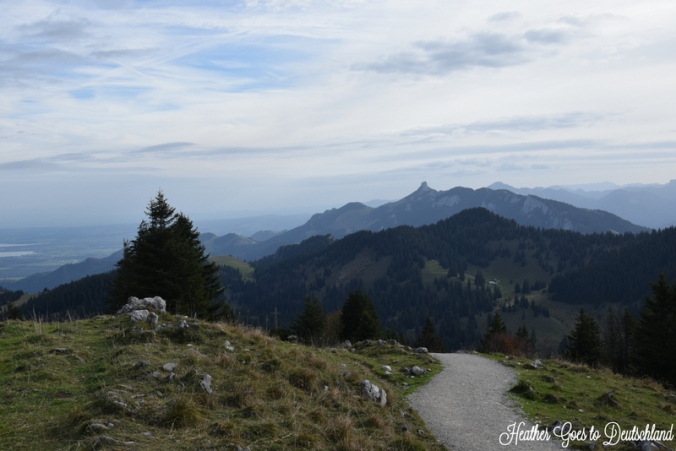 The last two weeks have reminded me that I need to see if we can sneak in one more mountain trip this year. We’ve done well, but there can always be one more… right?

I think I could visit the Blaueishütte every year for the rest of my life, and I would never get tired of this view. 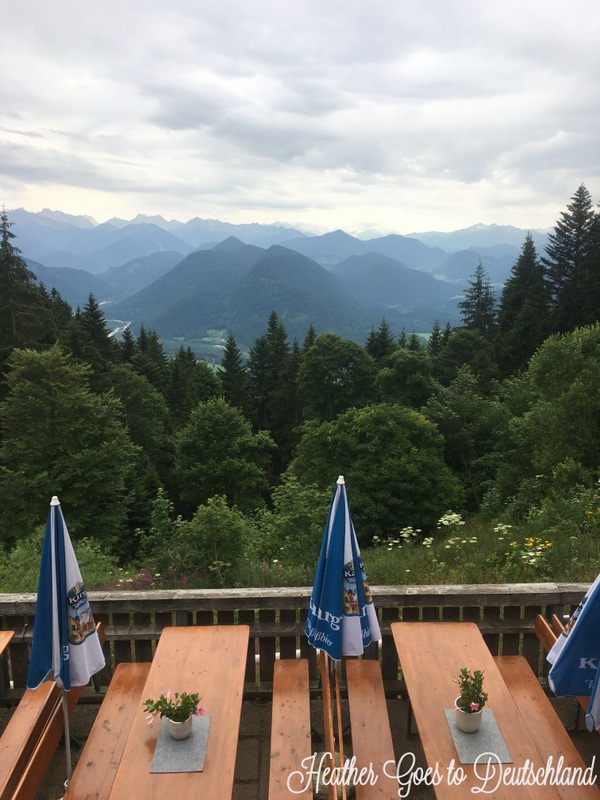 This weekend was a lot more homestead than scenery. But on the plus side, we now have bees. Fun!

Two years in a row had BV and I walking a long way uphill to get to the Bonnerhütte on their first open day of the season. Since we’re taking a break from South Tyrol this May, we won’t be getting those sweet sweet dumplings this weekend, but hopefully they’ll still be available whenever we do get there next time.

It occurred to me while on our latest Hütte overnight stay, that while I’ve written about some of our previous tours, I’ve never really written about the Hütten themselves.

In case you’re not familiar, the word Hütte translates into hut, cabin, lodge, barracks, hovel, and on and on and on. Leo.org gives me 23 different choices. Growing up in Wisconsin, I knew tons of people who had “cabins up north,” and so cabin has always struck me as the wrong word for a Hütte, at least the ones in the mountains. I usually go with ‘lodge’ or ‘shelter’ since those seem more appropriate for a large wooden or stone structure that can accommodate anything from a few people up to 200 or so.

Hiking to and staying the night in a Hütte is one of my very favorite ways to spend a weekend this time of year, but I wouldn’t say it’s an experience for everyone. It is however, often the only way to get views like this.

So, think you want to stay in a Hütte? Read on and let’s see…  END_OF_DOCUMENT_TOKEN_TO_BE_REPLACED

Like Loading...
Last week I wrote about the first day of my birthday hiking trip in Berchtesgaden, which was a three-day trip to the Watzmannhaus and back down. I’ll continue the story today with too many pictures as per usual, so if you’re interested, click away…

If you recall, we fell asleep at our first stop, the Kürointhütte, after a 700-meter gain, and were feeling good with only 500 meters to climb the next day.

We heard that the bad weather we fell asleep to would let up in morning, but return around noon, so we knew we wanted to get up and going early. That’s not a problem in the mountains, as I’ve mentioned before. The normal breakfast time at most mountain shelters seems to be about 6-8 or 9 am, so if you want to eat, you best get your butt up. Since we had already paid for breakfast in our half-board, we weren’t about to miss it. The Kürointhütte provided a really nice breakfast spread, with plenty of breads, meats, cheeses, sweet things, and a very yummy oatmeal with apples, raisins, and cinnamon. After filling up and enjoying a few cups of tea, it was time to say goodbye to our temporary home and set off.

It was around 8:30, and the signs to the Watzmannhaus gave us an estimated time of about two and a half hours. We figured that would get us there early enough to miss any bad weather, which was very important as there was a small Klettersteig, (a climbing path with fixed ropes), in between the two shelters. Normally we steered away from routes involving these, but somehow we missed that detail in our research. BV is totally cool with it, but I’m not experienced enough for a difficult Klettersteig. One of the girls at the shelter had assured us that it wasn’t anything that you needed equipment (helmets, ropes, etc.) to do, and that we would be fine. So we decided to start, and see how it looked when we got there.

Before we got too far though, we had to stop and say hello to some of the friendly mountain critters… 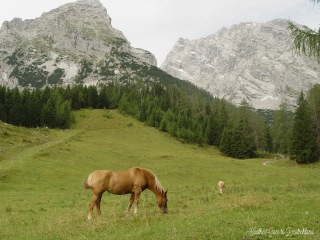 I also have a picture of this very sweet horse trying to eat BV. This seems to be a recurring theme for him… last time it was a cow, this time it was a horse… I’d hate to know what might happen if we ever run across a bear.

The first thirty or so minutes of this hike were pretty easy. We left the pasture and continued along a rocky path through some thick woods that climbed the hill on the left side of the path, and dropped to the valley below on the right.

As we hiked through the forest, we could see a wall in front of us and off to the right. We could also hear the distinctive “clack clack clack-ing” of hiking sticks, and tried to figure out where it was coming from. Finally the forest thinned in front of us, and we were faced with this…

The clacking got a bit louder, and in between rocks and trees we could see the bright jackets of people who had left the shelter a few minutes before us. Realization dawned on me and I believe my exact words were,

“Oh fuck no. Absolutely not. No way.”
We found the Klettersteig! We stood for a few minutes and watched the people making their way up the path ahead. It didn’t look too steep, and although they were using their hands, they could still use their hiking sticks, and were obviously not secured with ropes, carabiners, etc. We decided to go ahead, and see how it went. The trail wound along the ridges on the side of the cliff, but it wasn’t horribly steep for the most part. You needed your hands for most of it, but there were ropes drilled into the rock for most of the difficult passages. BV insisted on staying behind me for security purposes, but his arm waving in the corner of my eye was really more distracting than helpful.
I wouldn’t recommend this route to everyone, and there’s no chance I’d want to go down it, but going up wasn’t too bad. However, if you suffer from vertigo, I’d give it a pass, as that cliff drops off all the way to the valley below. The views were spectacular, but it was easy to get a little woozy. 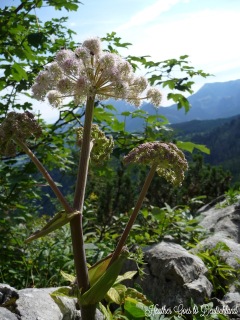 We got through the Klettersteig unscathed, except for our pride which was wounded when a whole family lapped us. Seriously, these parents with four or five kids galloped past us like mountain goats. One of the kids was wearing what looked like water shoes, and flew up a huge pile of rocks right in front of us. Oh, to be young and have no fear of plummeting to your death…
With the Klettersteig safely behind us, we figured it was smooth sailing for the rest of the trip up to the house. The next part of the path took us through another cow pasture, but this one was cow-less. 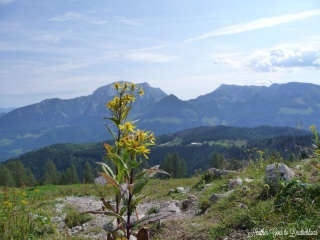 We took a break on a well-placed bench to enjoy the view and have a granola bar. Up the hill behind us we could see the hikers ahead going back and forth along a switchback path that climbed further up the mountainside. The path was extremely rocky, uneven, and steep in places, as it twisted and wound along. Again, it wasn’t horribly difficult going up, but we were already pretty tired from the Klettersteig, so it seemed worse than it was. We’d been hiking for around two hours and the house was still high on the hill ahead of us. As we turned our back on the valley, we could see the skies starting to get a little darker. 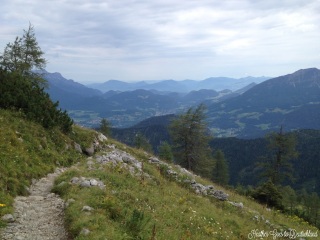 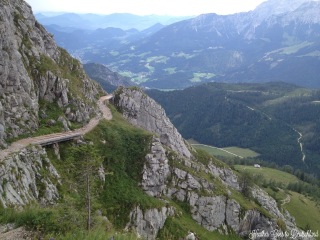 In the photo above, you can see a clearing on the right side of the forested hill, where we were at the Kürointhütte, and the cow shed in the clearing below that, where we just were.

Finally, at about three hours and fifteen minutes after leaving the Kürointhütte, we arrived at the Watzmannhaus.

As I mentioned before, we knew we wanted to get there early before the weather moved in and we were successful in our quest. There were a few other hikers when we arrived, but it was only a stopover for most of them. We were officially done for the day though, so it was time to get our liquid reward… 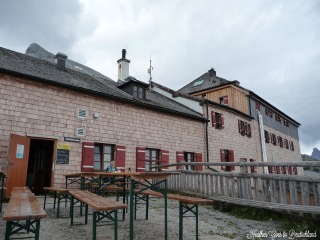 As you can see, when we got to the house, the blue sky was pretty much gone. Thank goodness we got there when we did, because we got to enjoy the view for a whole thirty minutes. The clouds moving in were pretty epic though… and we even had a dancing bird to entertain us. 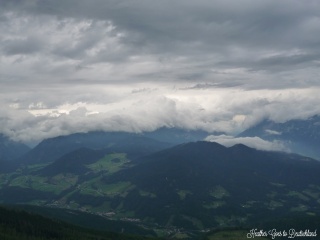 At this point we realized that the good view was gone and the rain was coming, so we relocated into the house while we could still get a table.

We spent the rest of the afternoon watching the large dining area fill up around us, eating, drinking, and reading. We took a short walk a little higher above the house later when it looked slightly lighter outside, but the house was in a cloud for the rest of the afternoon. It rained off and on, ruining quite a few hiker’s plans to reach the summit that day. Everyone who came in was drenched, and I was very happy that we had gotten there early, as we had both forgotten waterproof jackets. Very silly of us.
Our room was in an 8-person Matratzenlager (mattress dorm), and poor BV had the task of boosting me in and out of our top-bunk assigned places. Getting down in the morning was a bit tricky too… next time I’m checking to see if there’s a ladder before I agree to our spots!
The cloud was still there the following day, but the rain had stopped, so the trip down was fairly smooth. The first part was the worst, as it was that steep, rocky, path, and it was still a bit wet going down. We took that verrrrrry slowly, but the sky cleared up and we made good time down the rest of the mountain. The path alternated between rocky cowpaths and gravel roads, and we had a good rest stop at an Alm for a snack. Then it was back running downhill, to a bus, another bus, and finally back to the car… the birthday vacation was at an end.
Maybe next year a spa is a better idea…
Got any Klettersteig tips? Or any other hikes to recommend? Let me know in the comments!