A peaceful scene on a sweltering day near Kelheim. I haven’t been to Kloster Weltenburg since this day… should probably go back there and do a quality check on the beer.

One of my favorite day trips that I’ve taken since living in Germany was when my friend Courtney and I went to the Kloster Weltenburg. Since that was two long years ago, it was about time to get back down there again. BV and I took it pretty easy last week after my parents left, but by Saturday we were feeling up to venturing back out. The weather forecast was predicting temperatures above 30 degrees Celsius (that’s upper 80s-90s for those of you playing the Farenheit game), and we figured Weltenburg would be the perfect choice with river access, beer, and a relatively flat walk along the river.

We had a great day, even if  not everything worked out to plan. Instead of driving, we took the Bayern Ticket down to Kelheim, where we planned to start hiking. That’s also where the boat docks, so you can play it by ear which way you want to go.

River access: we had river access on the way to the Kloster for the first several kilometers, but then the  path climbs up the hill above the bluff, You stay up at the top of that hill for about the last 30 minutes, before coming back down. On the way back, we took the path on the other side of the river, and didn’t come to the river until the very end. With temperatures at 34 in the afternoon, we were regretting our choice of staying on that side! There is a path along the river on both sides, but the path from the Kloster doesn’t intersect it until you get back to Kelheim. Five kilometers is not usually a big deal, but the heat and humidity in the forest were…. ick. And I have some truly impressive bug bites, to add to the mix.

BV checks out the view

Having said that though, the feeling when we finally stripped off our shoes and stuck them in the water was sublime.

Yes, the children are throwing rocks 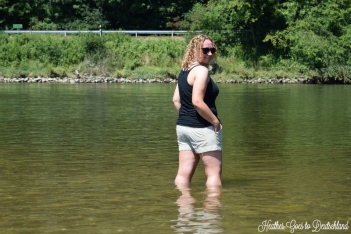 Relatively flat walk along the river: As I said before, you had to climb up the bluffs along the river. There were many stairs involved, and I was regretting my choice of beat-up, old, imitation Converse for the day. There were some places that were a bit steep and rocky, and shoes with no tread were not doing me any favors.

When you hike from Kelheim, you descend the fairly steep hill. directly across from the Kloster. I think the road continues around for another 1.5 km or so, and you can probably cross on the road down there, but we opted to take the shuttle boat for the bargain price of 1.50€ per person. The boat driver said he would also take people slightly down the river to the beach area around the bluff, which meant you could avoid climbing up and down the giant hill again. In retrospect, that would have been a good choice. But, c’est la vie, right? We weren’t worried about that just yet… we were just trying to get the feet in that glorious, glorious water.

Beer: The beer was delicious. And cold. And perfect in every way.

We decided to have lunch at the Kloster, and that didn’t disappoint either. Just like last time, I ordered off the seasonal menu, but this time it was Pfifferling season! That’s right, mushrooms (chanterelle, to be exact). 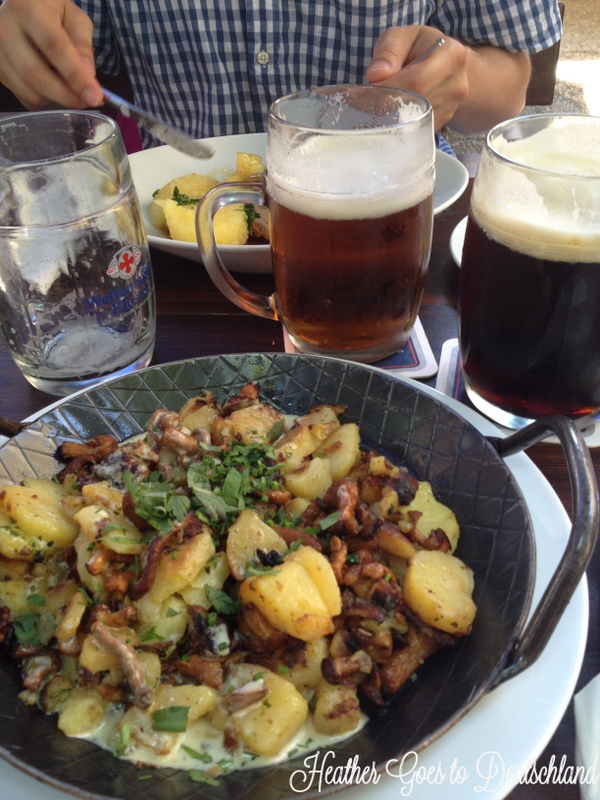 I had a Pfifferling pan, which mixed the mushrooms, roasted potatoes, bacon, and seasonings into a delicious, delicious flavor fest. BV opted for Spanferkel, or suckling pig, with dumplings. That falls into the category of “things he has to eat when we go to restaurants because there is no way in hell that I will ever cook that.” Sorry honey, not happening.

By the time we ate, drank a few beers, and tracked down our very harried waitress to pay the bill (it was packed, of course), it was getting on in the afternoon. We decided to walk up the hill behind the Kloster, and there we found the aforementioned path back to Kelheim that had no river access. It was pretty though! 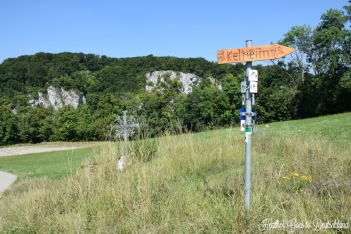 There were a fair amount of people wandering around, so I didn’t try to recreate one of my favorite pictures… but I wanted to!

What can I say, I’m still waiting for that point where you stop being self-conscious. I was led to believe that after 30, you care less. False.

There were some other interesting sights on our forested walk back, even if I forgot about climbing the hill to see the Roman ruins. Damn! Guess we’ll have to go back again. 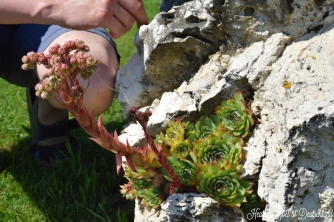 A home for assorted critters

When we got back to Kelheim, we were able to find the river access path, and since we had about an hour until the bus, we went and stuck our feet in again. Again, it was glorious.

Not pictured: this guy’s Speedo

After we cooled off a bit, we wandered over to the same bus stop that we had gotten off at (not directly by the boat landing, but across the bridge). According to my Deutschbahn app, the last bus we could possibly take was at 17:22; the next bus wouldn’t come until after 10pm. We were there about 17:10, but figured the app couldn’t possibly be right. After close inspection of the timetables, we had to admit that it was correct.

This is the part that makes no sense to me.

Why do no buses run between the location of a fairly popular tourist destination and the train stations between 5 and 10 pm on the weekends? Isn’t that when people are coming back? How the hell do all those bachelor parties get back to their trains after they drink all the beer?

Nearly everything here has some kind of logic, but this just defies all of that. I have to assume that it’s some kind of conspiracy between the town, the taxi services, the public transportation, and the monastery. It just makes no sense. If anyone knows what’s up with this, please explain.

As I said, we were at the bus stop early. And we waited. And waited. And waited. A bus finally came by, 10 minutes later than scheduled, but it had no number and it didn’t stop. Since we weren’t at the main station by the harbor, we decided to walk over there and see if we could find anything else.

Of course, as we were walking across the bridge, our bus went whizzing past. I guess it’s acceptable to be 15 minutes late when the bus is pulling a trailer full of mountain bikes… they do take some time to load and unload.

We searched in vain for another bus at the main bus station, but without luck. Instead, we got to call a taxi to take us to the train station, which was about 10 km away. The whole reason we had taken the train that day was because I had convinced BV that it was a good idea. Every time we go hiking we can’t find parking, or we get stuck in a Stau (traffic jam), or the navi can’t find where we want to go. Then we say, “you know, we should really take the train next time.” The next time rolls around, and we can’t drag ourselves out of bed early enough. And so the cycle continues. But this time I convinced him, and we had issues. That does not bode well for the next trip.

So, my message to you all, is beware. It’s a great day trip, but if you’re on the bus, watch the time!

Luckily, rivers and beer make up for slight inconveniences, at least in my book.

Got any other suggestions of places to beat the heat?