It’s cold and snowy here in Germany, and I’m on the dawn end of an all-nighter due to some pressing paperwork. That is a perfect storm of blah, so we’re going to step back a few weeks and talk some more about Italy today.

You already know that we ate some fantastic food over our New Year’s vacation, but today I’m going to give you a little peek into where we stayed. The accommodation was about as far from a typical hotel as you can get, but in this case it was not a bad thing. Some friends of BV operate a Ferienwohnung on the side of a hill in Tuscany, so that’s where we stayed.

A Ferienwohnung is a ‘holiday apartment,’ and they have three or four of them on the property. BV and I stayed in the largest one, which had a kitchen, bathroom, sleeping area for at least five people, and the biggest table. This meant that all of four of the shared meals were held in our house.

We traveled with some friends, and their apartment was a bit smaller, and would only sleep two comfortably. All the apartments are heated by wood stoves which have some major pros and cons. Pros: they smell good, they get very warm, and you can throw all paper garbage right into the oven. Cons: they smell a lot and so will your clothes, and as my friend said, “it’s like a test baby.” Meaning that you have to get up every two hours all night, or you will have a very cold wake up call. Tuscany in January is much warmer than Germany, but still pretty chilly at night. Brrrr.

All the houses were furnished in a mish-mosh of objects, from the dishes to the bedding. Even the tiles in the kitchens and bathrooms were a mix of “normal” tiles, to pieces of mirror or mosaic tiles. (I slacked… I forgot pictures. But the bathroom floor was fascinating). There was something interesting to see everywhere you looked in the houses. If you didn’t bring anything to read, there were tons of books from previous guests (as long as you didn’t mind reading in German), and even some board games that had been left behind. Schwabach Tycoon, what?? Who knew.

But if you’re in Tuscany, you don’t want to hang out in the house, right? Well if you thought the inside of the flat was interesting, you were in for a treat outside. My old sculpture professor would have called it “found object art,” and that’s about all I can say. 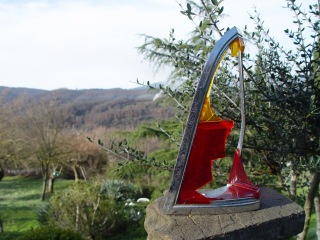 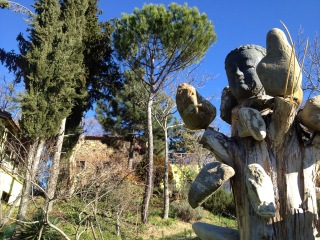 So that’s a glimpse into where we stayed. This kind of a place probably isn’t for everyone, but it’s an experience to be had. So if you are into Tuscan hillsides, wood stoves, found objects, good food, and don’t mind driving 15 minutes up a potholed dirt road, this might be your kind of place. German skills are encouraged though, just as a warning. There are a lot of stories at the top.