Wednesdays for me are always weird days. I think this has something to do with the fact that it’s the only day I’m working at the moment, and so any day that I don’t spend hanging out around the village seems weird. Thus, Weird and Wacky Wednesday, which will be a series that celebrates f-ed up stuff I see, and it will happen whenever I see that f-ed up stuff and make note. Having said that though, I do seem to encounter a lot of nonsense every Wednesday. One of these weeks I’m going to do a stream-of-consciousness post on my morning commute because there is absolute tomfoolery every week. But not today.

Today was actually even odder than a normally odd Wednesday, because I had a three-hour lunch break. My residence permit is up for renewal and I needed to get some new biometric pictures, so I took advantage of my extra-long lunch to run back into Nürnberg and take care of that. On the train back into the city, I noticed the first bizarre thing. I wanted to post a picture of this advertisement months ago and completely forgot about it. In the spring it seemed to be on every corner, but then it went away for a while. Now it’s been popping back up, so I’m wondering if the company is trying to cash in on the Dirndl look during the major festivals. First off, here’s a picture of the whole billboard, in all of its slightly sassy glory…. 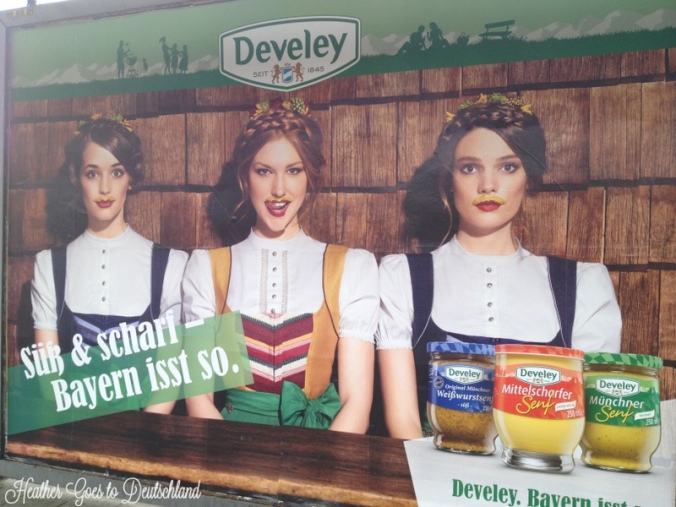 Yes, those ladies have mustard mustaches. I’m not sure what’s going on with the blank stares, but the middle one is practically begging for a sausage and it kind of freaks me out. Have you no shame, grandma-Dirndl girl? Although, I suppose if she had a low-cut blouse on, they’d probably have to slap a parental warning on the whole damn thing.

Again, this ad is everywhere at the moment. And when I was on the train early this morning, I thought my eyes were playing tricks on me, but my second ride confirmed I had seen correctly. Apologies for the picture from a moving train but check it out…

When I said it’s everywhere? I meant it. In fact, it’s everywhere twice. The trains do go pretty quickly sometimes, but is it really necessary to put them 20 feet apart in case you missed the first one? Or did the billboard man have some sort of a mix-up, and switch the second one with a Marlboro ad? Sooooo many questions. I pondered that one all the way back to Nürnberg.

Once back in town, my focus changed to my impending photos. In an effort to not look like I got up at 5am, I picked up some concealer, and popped into the photo studio. Getting the pictures took all of about five minutes (and while not great, they are a definite step up from my previous biometric photos which were scary as shit), and I hit the button to take the elevator back down to ground level. As I waited for it to arrive, I checked out some of the products available from the studio. And guess what BV is getting for Christmas this year?

Loving your pet is wonderful. I love our little kitty, and both BV and I are totally guilty of sending each other pictures of her being cute and fuzzy during the day. Example: I got this at work today…

Sorry this looks a little weird, BV clearly took this picture in our wardrobe mirror to avoid getting up. If you can’t tell, Marry the Cat is lounging upon my flip flops and slippers, which is one of her favorite activities. So yes, we are officially weird cat people. But a personalized Marry the Cat messenger bag might be overdoing it. Maybe.

The last Weird and Wacky Wednesday picture came as I was making my way across the square next to Lorenzkirche. I can’t even tell you the number of times that I’ve walked across that square, but somehow I never noticed something until today. When I first saw the red sign I thought to myself, “huh… since when is there a cafe back here?” Then I got closer.

I couldn’t tell on my phone that the sign got so washed out (glare sucks), but it says Musik Schule. That store is not a cafe, but a music shop (and school), with a window display full of gorgeous guitars and shiny brass instruments. Since when do people pop into music stores for some sheet music and coffee to go? I mean, if I’m going in there with the intention of dropping a few thousand Euro on an instrument, by all means, give me a free cup of joe! But it seems a little odd to me. I also avoid any take out place that advertises itself as Indian-Mexican-Chinese-Italian, for example. I figure it’s better to do one thing, and do it right. I do find it very intriguing though, so maybe next time I’m passing I’ll grab a cup and see how it stacks up to the other cafes in town.

Did you see anything weird or wacky today?

9 thoughts on “Weird and Wacky Wednesday”